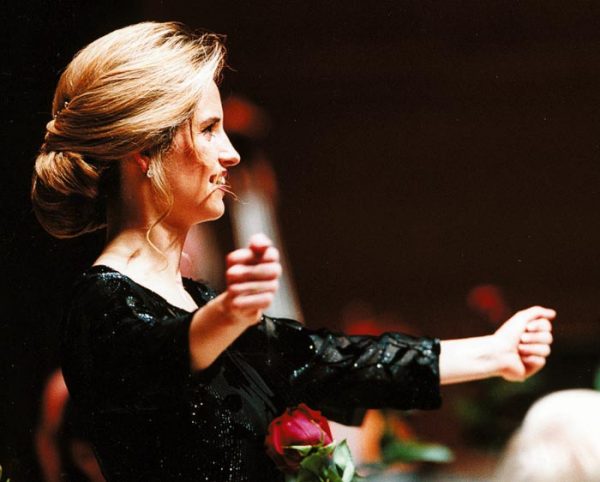 She is one of the brightest representatives of the new Spanish generation of orchestra conductors.

The prestigious Swiss manufacture of wathces Vacheron Constantin, with whom Inma collaborated since October 2007 and patron of young talented artists, strongly bet on Inma Shara, who was its world-wide image and Cultural Ambassador for years until last year 2017.  By the same token, Inma Shara has shared the same values and principles with the Banco Popular and that is why, since 2015, the entity has collaborated with her supporting in this way the culture in general and music in particular and being also its image. Currently, the Lexus brand works together with Inma Shara to support the musical art from the identity of values supporting young talents and enhancing their musical skills. In the same way, she has collaborated in the last campaign of 2017 with the company ” El Corte Inglés” whose logo has been “The Power” thus identifying his profession with the content of the message.

She conducted several concerts, enjoying the attendance of her Majesty, the Queen Sophie, and whose profits were entirely used for the Queen Sophie Foundation and for developing the project “Alzheimer”.

Inma Shara is well-known for her devotion and commitment with society by means of the music, conducting on countless occasions in support of non-profit-making organisms, such as organizations committed to childhood, concerts in honour of victims of terrorism, or musical celebrations aimed to raise funds for illnesses such as cancer.

December 2008, she had the privilege of conducting, with great success, a concert in the Vatican City chaired by His Holiness Benedict XVI, in order to celebrate the 60th anniversary of the Universal Declaration of Human Rights.

She has recently been awarded with the prestigious prize to the European Excellence for her international renown and her contribution to classical music, likewise she has been named “Spain Brand Honorary Ambassador” prestigious award from the Leading Brands of Spain Forum as one of the most brilliant representatives of the new generation of Spain’s orchestra conductors and her career. In addition to being invited by the European Commission and the SEEI to conduct the concert that has meant the closing day of Europe in the World Expo 2010 in Shanhgái, on 9th May, at the head of the “European Union Youth Orchestra”.

With the prestigious record label Sony Music, she has released several record projects with great success, with essentially educational and pedagogical content. Besides, she has published the book “La Batuta Invisible” by the hand of publishing company Conecta, part of the Penguin Random House publishing group, primarily aimed at the business sector, for which she has received the Award People Manager 2014 by the hand of the Spanish Association of Human Resources Directors.

Inma is an Honorary Member of the “Academy of Cinematographic Arts and Sciences of Spain”. He also belongs to the Protective Committee of “La Música del Reciclaje” (The Music of Recycling) by Ecoembes, whose chairmanship is H.M the Queen. Sofía, as well as being a Patron of the Pelayo Foundation, etc.

In addition, she has also conducted a tour of Gospel music with great success which was attended by nearly 15,000 people. Moreover, her next engagements include performances in South America and Europe.